Two words I love when put together, particularly when it comes to plant care. Such has been my life this past year that any plant requiring daily attention has been cut loose. If you’ve read my blog before, you’ll know that I used to get a bit emotional when saying goodbye to plants. Well, not anymore. This old cookie has toughened up, and plants have either had to shape up or ship out.

With this new philosophy, I have discovered a plant that has ‘shaped up’ exceedingly well. This would be the Amazing Air Plant. Yes, the capital letters are deserved. I’ve had several air plants (or tillandsia, as they’re scientifically known) for almost six months now and they’ve proven to be hardy little things. They’re (mostly) alive, healthy and growing new foliage with very little effort on my part. Of course, there have been a small number of casualties, but that’s to be expected when growing something new. Overall, the survival rate has been high, and they’re just so darn interesting to look at. At first glance, they might appear a little odd in an alien-like way, to the extent that you’re not sure if you should be touching them. But once you get over the initial heebie-jeebies, you realise they’re a plant to be admired, not least of all because they cleverly suck in nutrients from the air. I mean, that’s a pretty neat party trick right? 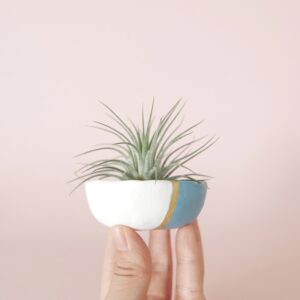 If you’d like to try your hand at growing air plants, here are some basics that I’ve picked up so far.

No Soil, No Planting – but lots of Air
This is truly the best thing about air plants. The total lack of dirt and fuss. Since tillandsia take in nutrients from the air around them, they don’t need to be planted into soil. Rather, what they need is space for good air circulation. This means no closed containers and they shouldn’t sit on any medium that is wet all the time.

Every now and then, they’ll sprout roots from the base, though they’re not needed for food or water. In the wild, tillandsia anchor themselves onto other plants or objects by using their roots to latch on. Since indoor tillandsia don’t need to cling onto anything, you can just snip the roots off.

Light
Bright, filtered light seems to work well for these guys. I keep all of mine indoors next to a window, where they get light during the day. I have heard that direct sunlight, particularly afternoon sun, can be too harsh, though this probably depends on the type of air plant.

I’ve gone away for about a week at a time with semi-transparent curtains drawn, when the air plants would have received quite low levels of light. They were fine when I got back so they seem fairly hardy in sub-optimal conditions for short periods of time. Water
I initially started out by misting my air plants once a week, but this didn’t seem to be enough as some of them were getting brown dry tips. I now give them a water bath once a week for about two hours. This is pretty easy to do – just fill a container or bowl with water and place the plants upside down in the water. I have mistakenly been using boiled water (at room temperature), which apparently you shouldn’t be doing as the good minerals have been boiled off. Mind you, the majority of the plants seem to be fine with this, but I’ve switched to tap water anyway to see if it makes a difference. I leave the tap water for about an hour before I bathe the plants, to allow time for the chlorine to evaporate.

After their soak, give the plants a good shake to release any water trapped in the base between leaves. Place them upside down on a towel to let them properly dry out before returning to their display piece. Trapped water leads to rot which is a sure killer, so this part is key. About 4 hours of drying time is the general rule of thumb, i.e. if your plant is still wet after 4 hours, you might need a drier space to let it air out quicker.

One last thing – only water your air plants in the day time. They breathe during the evening, which they can’t do if they’re underwater!

As with all plants, the adjustments needed to air, light and water conditions will depend on your given environment. Hopefully these guidelines are helpful as a start, but don’t forget to take cues from the plants themselves. These are wonderful, amazing plants which thrive without needing too much from their human carers. My kind of plant these days!

4 thoughts on “The Amazing Air Plant”